He says: “NASA, the board argued, had become too reliant on presenting complex information via PowerPoint, instead of by means of traditional ink-and-paper technical reports. When NASA engineers assessed possible wing damage during the mission, they presented the findings in a confusing PowerPoint slide — so crammed with nested bullet points and irregular short forms that it was nearly impossible to untangle.”

Clive does try to get support from Edward Tufte, the well-known PowerPoint critic. He adds, “This year, Edward Tufte — the famous theorist of information presentation — made precisely that argument in a blistering screed called The Cognitive Style of PowerPoint. In his slim 28-page pamphlet, Tufte claimed that Microsoft’s ubiquitous software forces people to mutilate data beyond comprehension.”

To balance his opinion, Clive adds, “And PowerPoint still has fans in the highest corridors of power: Colin Powell used a slideware presentation in February when he made his case to the United Nations that Iraq possessed weapons of mass destruction.”

Not to be left behind, there’s already a rejoinder to that article at the ADTMag site by Mike Gunderloy that says PowerPoint Doesn’t Make You Dumb.

Mike responds by stating, “If there’s a problem with PowerPoint, it’s not that it makes you dumb, it’s that Microsoft has never taken the time to show us how it can make you smart. Over the years, the company has shown a charming naivete towards the uses of its tools. The corporate attitude has apparently been that it’s enough to ship tools capable of world-class use, and then the customers will figure out how to use them. Instead, we thrash around, toss bullet points on slides, and never learn how to design an information-rich graphic.”

Mike concludes by providing a suggestion to Microsoft, “Heck, pay Edward Tufte to write a book about the effective use of PowerPoint and post it on the site. If Microsoft could add world-class training to world-class software, perhaps we’d start seeing articles on how PowerPoint makes you smart.” 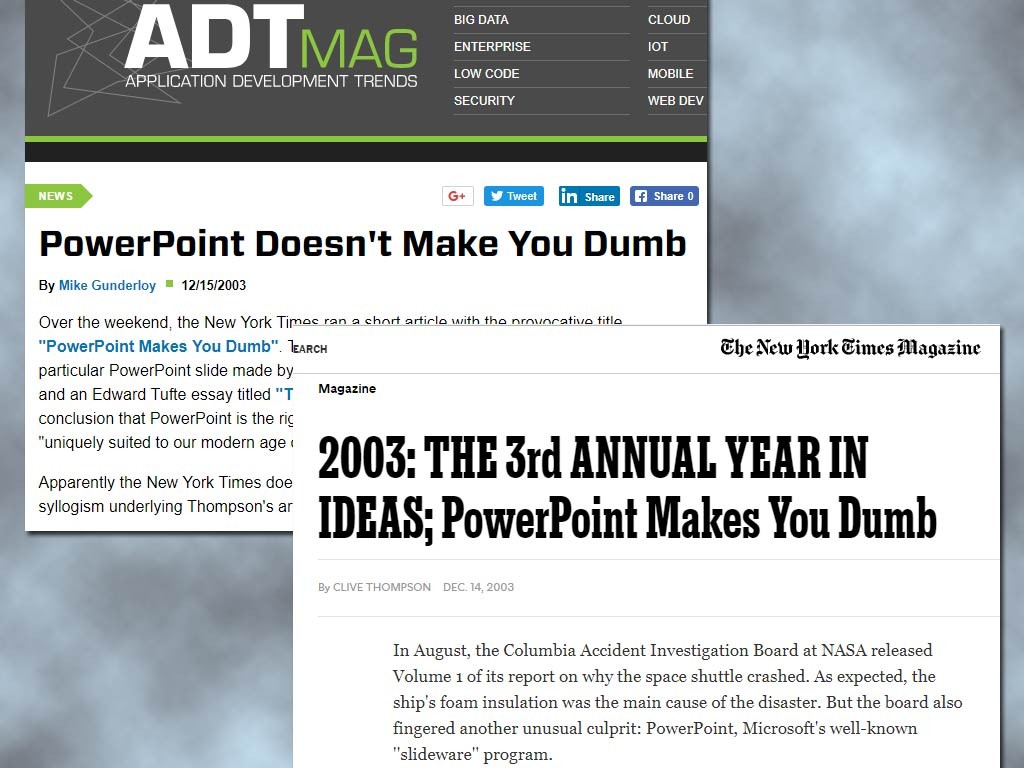