Andy Pope works in London, UK, developing in-house reporting systems. He uses VBA to automate Excel and PowerPoint. In his spare time, he frequents various Excel forums and maintains his own website on Excel charting. His contributions to the Excel community have resulted in him being awarded as Microsoft Excel MVP since 2004.

In this discussion, Andy discusses the Chart Pattern Fills add-in for Excel 2007.

Geetesh: Andy, tell us more about your Chart Pattern Fills add-in for Excel 2007, and what motivated you to create this add-in?

Andy: I developed the add-in in response to posts by users who need the pattern fills feature that was depreciated in Excel 2007. Apparently, pattern fills are heavily used by those in academia. I was aware that actually only the user interface for the feature had been removed so I went about reconstructing the Patterns dialog. I enjoyed the challenge of creating a dialog that would dynamically reflect the users color choices, rather than just using static images.

It’s a totally free add in and available on my site. 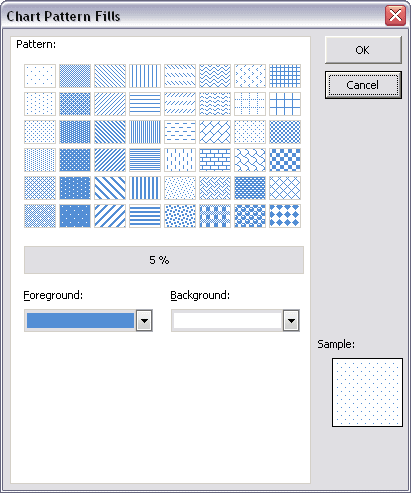 Geetesh: PowerPoint 2007 users also no longer have access to the pattern fills so will this add-in work for them too?

Andy: Unfortunately, not directly within PowerPoint. The porting of the add-in to PowerPoint is not currently possible. This is due to limitations in PowerPoint’s VBA Object Model and how the add-ins function works compared to those in Excel. As and when/if Microsoft makes appropriate changes I will attempt to make a PowerPoint version.

In the meantime for those wanting to use the add-in, you can create their chart in Excel, format it as required using the add-in, and then insert the saved file as an Object within PowerPoint.