Guy Kawasaki did the Tuesday morning keynote at the Presentation Summit in New Orleans on September 29, 2015. He started by reminiscing about his days as the chief evangelist for Apple Computer. He spoke passionately about Steve Jobs.

Guy speaks around 75 times a year in conferences and delivers keynotes. His work certainly has to do so much with speaking. And that’s a continuation of his job at Apple, where he was evangelizing the Mac to the world.

Like Steve Jobs, Guy also quit Apple. He left Apple twice. He returned to Apple when the company had to survive. And that was good, because as Guy said in jest:

I left Apple twice. If I had stayed either time, I would not have been here today.

Guy then spoke about his role at Canva. He asked about how many people in the audience used Canva?

He then also spoke about his role on the board at Wikipedia.

And that’s how he led the audience to the topic of his keynote, How to get a Standing Ovation. Guy admitted that there’s a reason why he structures his talks with numbers, and that is to hold attention. He was, therefore, going to talk about 10 ways in which you can be assured that your talk gets a standing ovation. 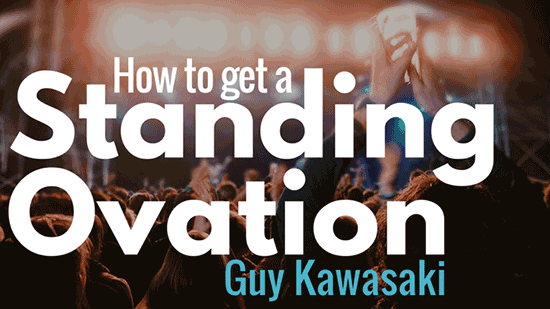 And then some more comments from Guy:

I have hearing problems. Maybe that’s because, as a Venture Capitalist, I have heard so many crappy presentations.

Then Guy shared his tips. He also accompanied each tip with a visual slide.

1. Have something to say

Many people do not understand your message unless you say something important right at the beginning. It is important that you get as much information possible about your audience as you can. Research on sites such as LinkedIn. LinkedIn is better than other social sites because people typically put up more authentic stuff on their LinkedIn profiles. LinkedIn is the best because people you research are more or less what they say they are on their LinkedIn pages. Other social sites need not be ignored. Try to research almost any and every audience member you can. Find common interests — for that part, you can also look up their Facebook and Instagram pages. Guy spoke about his well-known 10-20-30 rule that’s about keeping your slides limited to 10, your time under 20 minutes, and your font-size at least 30 points. He then spoke a while about this rule, and also ventured into the Mac vs. Windows arena! Some quotes:

No one uses Windows voluntarily — (do you want to) use this amazing device (Mac) that looks like it has been created by Tibetan monks, or this crappy plastic piece (Windows)?

(About the at least 30 points font size rule), find out who the oldest person is. Then divide their age by two. What if your VC is 16 years old? Then God bless you!

(About the at least 10 slides rule), my speeches have 50 to 75 slides. People look at me with daggers of hypocrisy. But I tell them that they are not me!

Use 16:9 widescreen slides rather than 4:3 standard ones. Make sure that you use it best. And dark backgrounds colored black work better than lighter backgrounds. They look more serious, more creative, and better. White looks like you started typing on a piece of paper. I met a black entrepreneur who asked me if I had any last-minute tips. I asked him, “Is your background black”. He replied, “Yes, I am from Atlanta”. But he did change his (slide) background to black.

Pack the house. Get 105 people in a room that seats 100. Do not get 200 people in a room meant for 500 people. If you can specify, ask for classroom-style seating rather than having it theatre style since the room will appear better attended. Audiences may have a flights to take, or there may be other reasons. However audiences deteriorate later in the day, and are in an altered stage. If you have a choice, it’s best to speak earliest in the morning — and be the first speaker. Do circulate with the audience before the presentation. Some more quotes from Guy:

Take selfies before with them, and they will certainly clap after the session.

Mix with the crowd, warm up the crowd. Then it’s easier to speak in a relaxed manner.

Always keep your intro different. Guy spoke about his LG washer and dryer at an event at LG. In Moscow, he spoke about cannon balls. And in Istanbul, he used his own picture in the Grand Bazar of Istanbul, wearing a Fez cap. Here are some more quotes from Guy:

You kind of then own the audience. It’s a reason to get to the venue a day earlier. Don’t sell all the time. Don’t do a sales pitch all through your time. Note: Guy spent only 5 out his 60 minutes in the sales pitch for Canva, and that too was more of an awareness pitch rather than selling .

Stories will get you great press. You must have lots of stories in your presentation. Guy then quoted Pierre Omidyar, the founder of eBay:

My girlfriend had a very difficult time selling stuff she does not need, so I created eBay.

A small Q and A session followed:

Did you buy the Fez cap in Istanbul? No, there was no space in my bag!

What should I do, my clients always want rules. In the real world, very few people will follow rules. So you don’t have to worry. One person who VC’ed got 60 slides to show me after reading all my books!

When the pitch is better than the idea, what do you do? In my life, I have seen 5 good pitches among the thousands.

Black is the new black.

The former chief evangelist for Apple and current chief evangelist for Canva, Guy Kawasaki is known the world over. He sits on the Board of Trustees of the Wikimedia Foundation and is an executive fellow of the Haas School of Business at UC Berkeley. He is the author of The Art of the Start 2.0, The Art of Social Media, Enchantment, and nine other books.

« Removing Customizations from PCB Files in PowerPoint 2016 for Windows