Wondering why others have extra features in Microsoft Office 365 programs that you don't have? The answers can be found in the way Microsoft updates Office 365 applications. 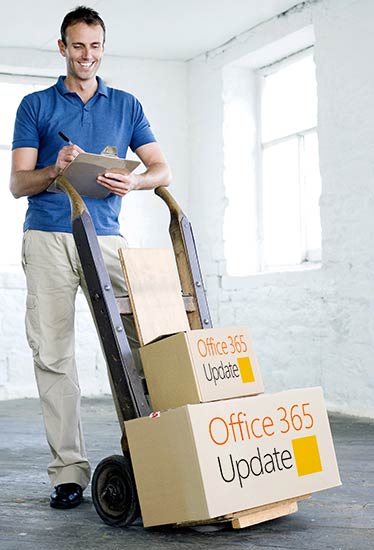 Is this normal? And if yes, why does this happen? The answers to all these questions can be found by understanding how Microsoft updates Office applications.

I asked some of these questions to my friends, Dave Barnett and Anneliese Wirth at Microsoft, and they answered all my queries patiently. Thank you so much to both of you, Dave and Anneliese!

The intention is to look at this topic with a wide perspective now, and in future posts, we will get to other detailed aspects as we narrow the subject further.

Why do I not see any Morph transition effect in PowerPoint?

The reason why Cally sees no Morph transition effect or any other new feature in PowerPoint or the rest of her Microsoft Office 2016 suite is that she has purchased a perpetual license for Microsoft Office 2016. She will not get any new features that Microsoft develops and releases for Office 2016. However, she will continue to get updates (such as security updates, bug fixes, stability improvements, etc.) and any Service Packs, if and when released.

To get any new features, Cally will have to either:

You May Also Like: Version and License of Microsoft PowerPoint and Office

For Heaven’s Sake, What is a Perpetual License?

A perpetual license is something you buy only once, and you can then use the product as long as you want. If you have been using computer software for a long time, you know that is exactly how software was bought all these years until the subscription model changed everything upside down!

To paraphrase again, a perpetual license is a “one-time purchase”. To use an analogy, think of subscription vs. perpetual as similar to the rent vs. buy example.

Now let us look at my question:

Why did I get the Morph transition effect later than George? And how do I know whether I am going to receive any new features at all?

The reason you got the Morph transition feature later than George is that you did nothing at all, and were also in no hurry!

When you install Microsoft Office as part of an active Office 365 subscription, you typically will get new features after they have been thoroughly tested and implemented widely (at least that is the intention). This ensures that you experience no glitches or teething problems, as testing by initial users will result in a fairly smooth implementation.

About your second question, you will eventually get the new feature as long as you have an Office 365 subscription.

OK, I have another question! Is it possible for me, as an active Office 365 subscriber to get no new features at all?

Well, you could but that would mean opting out of all updates that get you the new features. That would essentially turn your Office 365 subscription into the perpetual version that Cally has. The updates are the distinguishing feature of Office 365.

And before we end this post, here is a question from George:

I thought I was plain lucky that Microsoft blessed me with the Morph feature before anyone else! Now, are you telling me that this is something that I opted for? But I don’t seem to remember doing so.

You don’t have to be opting for any quicker updates on your own. If you work in a large company, your system administrator may have turned on this option for you.

Typically, all updates are delivered via the Current and Deferred channels to Office 365 subscribers. As the names themselves suggest, the Current channel delivers updates quicker than the Deferred channel. Having said so, there are several subsets within both the channels, and we can discuss these differences in a future post!