More about my missing bag! Looks like Thai Airways sent this bag to Taipei rather than Los Angeles — fortunately, they sent the other bag to Los Angeles so I had half my stuff when I landed at LAX airport.

Thai Airways does not do the missing baggage handling on their own — they outsource it to another company — and this other company outsources the actual delivery of the delayed bag to another transport company — so that’s a whole lot of baggage numbers, file reference numbers, and tracking codes to keep track of.

Finally, Thai Airways confirmed that the delayed bag had made its way from Taipei to Bangkok, and to Los Angeles. Sixteen phone calls later, I received my bag a little more than 24 hours after I landed in LAX — delivered to my sister-in-law’s place just after midnight! If I had not made those sixteen calls, I may have received the bag a day later — and that would have been after I took the Amtrak train from Simi Valley to San Diego.

Here’s a picture of the Rush tag on the bag: 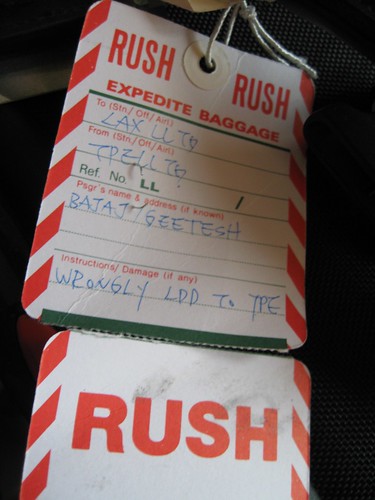 « Traveling to America via Bangkok