Signage versus Documents—Drive Your PowerPoint Home

Signage versus Documents—Drive Your PowerPoint Home 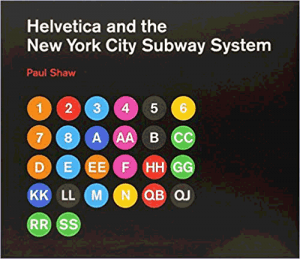 American Apparel, Staples, Knoll Furniture, and Lufthansa Airlines all share a common denominator with the New York subway system: each of these diverse organizations uses the same popular typeface in its signage: Helvetica. A book called Helvetica and the New York City Subway System describes why their decision-makers chose the font style:

For years, the signs in the New York City subway system were a bewildering hodge-podge of lettering styles, sizes, shapes, materials, colors, and messages. The original mosaics (dating from as early as 1904), displaying a variety of serif and sans serif letters and decorative elements, were supplemented by signs in terracotta and cut stone… Efforts to untangle this visual mess began in the mid-1960s, when the city transit authority hired the design firm Unimark International to create a clear and consistent sign system. We can see the results today in the white-on-black signs throughout the subway system, displaying station names, directions, and instructions in crisp Helvetica.

Helvetica is best suited for signage because it is a sans serif font which, with its clean, straight strokes, commands attention. In fact, sans serif is used for two of the most universally familiar signs: EXIT and STOP.

Serif font, with little hooks at the ends of the lines, is better suited for text documents because the hooks help a reader’s eyes to distinguish individual letters.This distinction was validated in a book called Reading in the Brain: The New Science of How We Read by Stanislas Dehaenev, a neuroscientist at the Collège de France in Paris. In a review of the book for the Wall Street Journal, Jonah Lehrer, the author of the newspaper’s Head Case column, explained why raising the bar of difficulty in visual information improves retention.

Unusual sentences with complex clauses and odd punctuation tend to require more conscious effort, which leads to more activation in the dorsal pathway. All the extra cognitive work wakes us up; we read more slowly, but we notice more. Psychologists call this the “levels-of-processing” effect, since sentences that require extra levels of analysis are more likely to get remembered.

The point here for presenters is to draw an indelible boundary between documents that are meant to be read and graphics that are meant to illustrate. If you are creating a document, by all means use the unusual sentences with complex clauses and odd punctuation that Mr. Lehrer described. And use serif font.

But if you are creating presentation graphics, treat the text in your slides as signage or headlines. Look at any newspaper or magazine and you’ll see that headlines are composed mainly of key words such as nouns, verbs, and modifiers, with very few articles, conjunctions, and prepositions; the latter are only needed for complete sentences in reading text.

Unlike readers of text, your presentation audiences cannot process your ideas if you assault their eyes with dense information on your slides. And unlike readers, your presentation audiences must process not only what you are showing but simultaneously what you are saying. Their eyes, ears and, ultimately, their brains go into sensory overload. Instead, compose the text in your slides as headlines and do so in san serif font—then provide the body text in your narrative.You are the presentation; your slides are the signage. 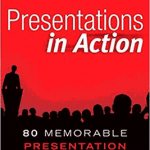 « Why Use PowerPoint at All? A Picture Is Worth a Thousand Words