Does this large, illuminated letter look familiar? It should. The style has been around ever since medieval times to mark the beginning of a new document. It has continued on into modern publishing where an enlarged first letter marks the beginning of chapters in books and the beginnings of articles in magazines and newspapers. Now it becomes a factor in how we view computer screens.

One of EyeTrackShop’s projects studied how users viewed the homepages of Facebook and Google+. The results, shown in the “Fixation Order” charts below and reported in the Wall Street Journal, found that in both cases, Users’ eyes head straight for the big status column in the middle of the screen, then over to the list of categories on the left side, then hop across to alerts on the right. 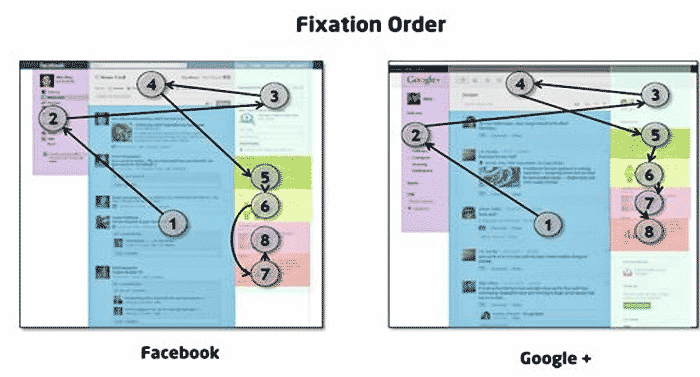 Those movements are driven by forces more powerful than the images on the Google and Facebook sites, two forces that drive the eyes of every human being:

Nurture: In Western culture, because we have learned to read from left to right, our eyes always start reading at the upper left corner of documents.

Nature: The optic reflexes in all human eyes impel them to take in new images, and so, having started at the upper left, readers’ eyes naturally—and involuntarily—move to the right.

As a result, human eyes do essentially what the eyes of the subjects in the EyeTrackShop study did: after centering on the full image, they move to the upper left to start reading, and then sweep across to the right to continue reading. Therefore, whenever you click to show a new slide, your audience’s eyes start reading at the upper left of the screen and sweep across to the right.

If your slide is densely packed with images, numbers, and/or text, your audience’s eyes will not see the entire image on the first rightward move; they will have to come back to the left and go back to the right again. The denser the slide, the more times your audience’s eyes will have to traverse the screen, the more traverses they make, the less they will hear of what you are saying.

Do you see where this is going? Back to the familiar Less is More principle, and this newly added corollary: Reduce the number of moves your audience’s eyes must make to understand your slide.

Apply this basic approach to the two most common slides in presentations today: text and bars.

You saw these principles applied in a prior blog, but they’re worth another look:

Feel how your eyes naturally take in each slide: they start at the left and swing to the right.

Do the same for all your presentations. Design effective slides by reducing the number of eye-moves your audiences must make.

Minimize the processing their eyes—and their brains—must do. Let them spend their energy and time focused on you.

Jerry Weissman is among the world’s foremost corporate presentations coaches. His private client list reads like a who’s who of the world’s best companies, including the top brass at Yahoo!, Intel, Intuit, Cisco Systems, Microsoft, Netflix, and many others.Jerry founded Power Presentations, Ltd. in 1988. One of his earliest efforts was the Cisco Systems IPO roadshow. Following its successful launch, Don Valentine, of Sequoia Capital, and then chairman of Cisco’s Board of Directors, attributed “at least two to three dollars” of the offering price to Jerry’s coaching. That endorsement led to more than 500 other IPO roadshow presentations that have raised hundreds of billions of dollars in the stock market.