Simon Raybould started his working career investigating at the causes of childhood leukemia and spent 24 years as a researcher at the UK’s largest social science research center. Very little of what he does is based on only his experience, no matter how comprehensive that experience is – it’s based on an understanding of the science of presenting and storytelling and his books in the field have become best sellers on the high-street. He’s also been a professional actor and playwright; he spent seven years as the technical director for dance companies, touring the UK and Europe; he’s been a teacher and a fire eater.

In this conversation, Simon discusses his new course, the Reluctant Storyteller Starter Pack.

Geetesh: Simon, please tell us about your Reluctant Storyteller Starter Pack? What is in the starter pack? 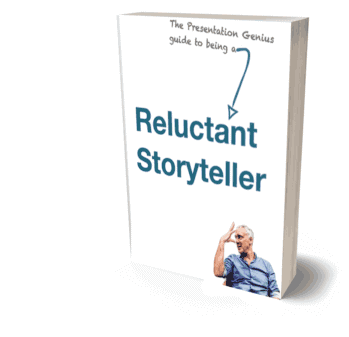 Simon: The Reluctant Storyteller Starter Pack gets you started using stories in your presentations (or anywhere else!) no matter how reluctant you are… and using them properly, not just telling them.

We know that using stores makes you more powerful but many of us don’t like doing it or don’t know how to. The pack gives you a series of easy-to-follow tools based on the science of how people listen and respond to other people. It’s a short ebook with a set of tools, and a follow-up set of five emails, each of which contains more material and links to videos for you to watch. I’ll add some free extra material too when I can, but that’s a goodwill thing and I don’t know when exactly. I don’t want people to think it’s not a finished product, because it is! Each of the exercises is simple, and simply explained, but in ways that don’t undermine the research-based power of the tools.

I decided to create the program and the Starter Pack because I was irritated… no, angry… about people who don’t know what they’re doing giving really bad advice on using stories. That means I’m not trying to make a huge amount of money from the Reluctant Storyteller. It’s something I believe in a lot, so it’s only $8.30. I think that’s a ridiculously cheap way to get yourself started as a powerful storyteller because by the end of the Starter Pack it’s you’ll have moved a long way.

The thing that got me really going was seeing someone in a shop who was struggling to reach things on the top shelf. I thought to myself that she just needed to be taller (don’t worry, I stopped to pass her the flour she was reaching for). That got me thinking – just saying “be taller” to a short person is about as much use as saying “tell stories” to someone who’s reluctant. It’s a waste of time and breath. You need to actually help them, give them tools. I like to think that the starter pack is the storytelling equivalent of giving the short lady in the shop a box to stand on.

Geetesh: Why do you call this a Starter Pack? Is there more learning content that’s coming soon?

Simon: Yes, that’s the plan. I’m working on the hybrid and live training program right now and that’ll be available later in the year but I wanted to get the Reluctant Storyteller Starter Pack out there as fast as possible because there was so much rubbish talked about telling stories – the sooner I could get some rigorous material out there the better!

« Add an Em Dash in PowerPoint for the Web