We have discussed visual clichés in the past—the idea has been to explain how you can overcome visual clichés by using the four principles of thinking creative, thinking profound, thinking logical, and finally thinking again.

In fact, in a cliché case study, we spoke about how everyone thinks about a light bulb when they need to express a bright idea. In fact, a search on Google Images for the term, “bright idea” singularly returns only visuals of light bulbs!

And then the other day, I saw this picture of too many light bulbs in an Accenture advertisement! Strangely, this did not seem clichéd? Why did this happen? Why did the cliché go away? 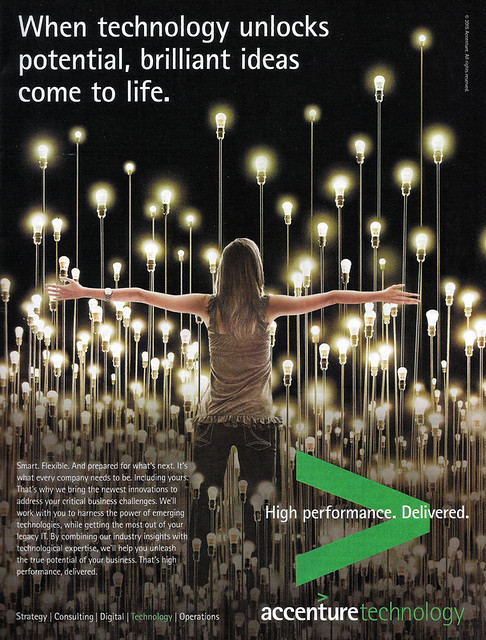 Is that because there is a way of overcoming a visual cliché, and that is to go overboard with the actual cliché itself! As they say, there is safety in numbers. Do too many instances of the same cliché make it a pattern? And do patterns make clichés insignificant? That’s something interesting, and can help you when you have few options to go beyond a visual cliché.

Patterns are created using multiple instances. Why do multiple instances of the same cliché negate each other? The answer to that question may be the fact that poison kills poison—at least this last metaphor of poison killing poison is very well known in the orient, and in India.

In the Mahabharata, an Indian epic there is the story of Duryodhana, who planned to kill his cousin Bhima. He tried to execute this plan by poisoning Bhima’s food. And then when Bhima fainted as a result, Duryodhana threw him into a nearby river. Poisonous snakes in the river bit Bhima, and this poison negated the poison that Bhima had earlier consumed. Thus, Bhima swam up the river and survived to one day kill Duryodhana!

And it seems like this poison kills poison metaphor may work with clichés too! One cliché may get negated with multiple instances of the same cliché.

So is it possible that you can overcome a cliché by going overboard? That’s food for thought! I have found that this approach can work sometimes, but only if implemented thoughtfully and tastefully.

« Transparency for Shape Fills in PowerPoint 2016 for Windows