Tucker Hatfield has been working as a Program Manager at Microsoft for 18 years and the last ten of them have been in Office. He’s worked on Cropping, Background Removal, Artistic Effects, Co-authoring, and Comments. He’s currently working primarily on Pen and Ink improvements for Office, including the recent Ink Editor feature. When work and family allows, he indulges his love for photography and is trying to teach himself play the ukulele.

In this conversation, Tucker explores the Background Removal in PowerPoint.

Geetesh: Tucker, you have been involved with the amazing Background Removal options in PowerPoint. What prompted you to add this feature?

Tucker: Background Removal was a lucky synergy between Microsoft Research (MSR) and the Office Graphics team.

As digital cameras and smartphones were beginning to make use of images in Office documents more common, we began to get feedback from customers that they needed to do simple photo editing without having to invest in expensive editing software or involve an artist. During planning for Office 14 (Office 2010), we decided we needed to improve our support for pictures in the core applications to address those needs. As a result, we made improving picture editing a priority and began planning.

At the same time we were planning, MSR was also investigating ways to improve the picture editing experience. During our research, we found an internal website from MSR Cambridge showing images of a program they were calling “Grabcut” that could isolate parts of a picture and let you remove the background. It included some demo videos that were short but impressive and we contacted them to find out how long it might be before that technology was available.

To our surprise, they responded by sending back a demo app that actually worked. It had a very minimal user interface and required a little finesse to use, but it worked quite well, so we started deeper discussions about how to get it into Office. Integrating Grabcut involved a lot of work to make it compatible with Office code, our rendering system, and our user interface, but MSR helped us every step of the way. In fact, our team received a Technology Transfer Award from Microsoft Research for our collaboration.

We shipped it in Office 2010, along with other picture editing features. During Office 2013 (Office 15) development, our India Development Center took over developing picture features and have made further improvements.

Tucker: It’s been amusing to see how much we use Background Removal ourselves. We do a lot of decks and specification documents where product shots, images of a user interface, or logos need to be used and we use Background Removal so that the image “floats” instead of having a rectangular border and a bland background. It also gets used a lot to remove parts of the image that we don’t want to show or to isolate objects or UI so that it’s the focus of the discussion. Seeing it used so frequently in work documents is very cool.

But I’d have to say that the most impressive use I’ve seen background removal put to was shown to me by one of the people who make decks for some of Microsoft’s major presentations. It’s a process where they take a single picture, remove specific background elements of it, and then “layer” it on top of itself. The result is that you can have objects look like they’re behind one element of the image and in front of another. You can even animate the shapes.

In the example I was first shown, the author used an animated icon of a skier skiing between background-removed layers of mountains. You can also animate layers moving horizontally at slightly different speeds to give a “Ken Burns” style pan of a static image. I’ve used these stacked images a lot since discovering the technique – it can add a lot of interest to an otherwise static picture.

As an example, I can take three versions of a mountain landscape: one complete, one with just the sky removed, and one with the sky and mountains removed. I then stack them so that they align and look like the original, but by adding in shapes at various Z-orders in the stack of images, I can create a 3D effect. 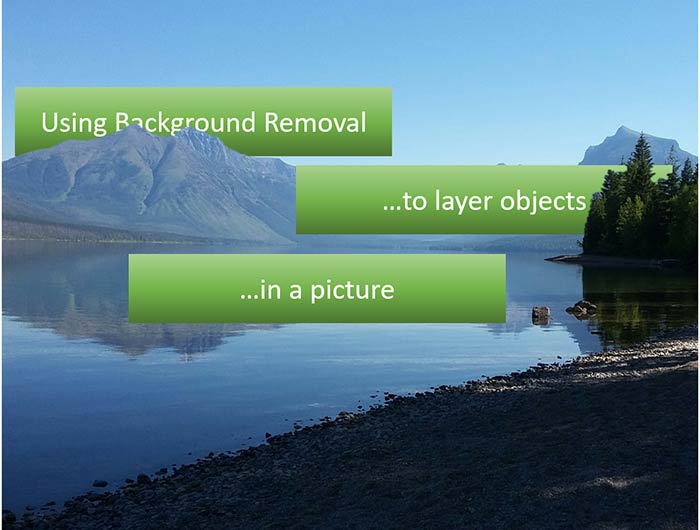 The Selection Pane helps a lot in ordering them correctly and since pictures “snap” in alignment, it’s easy to realign the separate images. 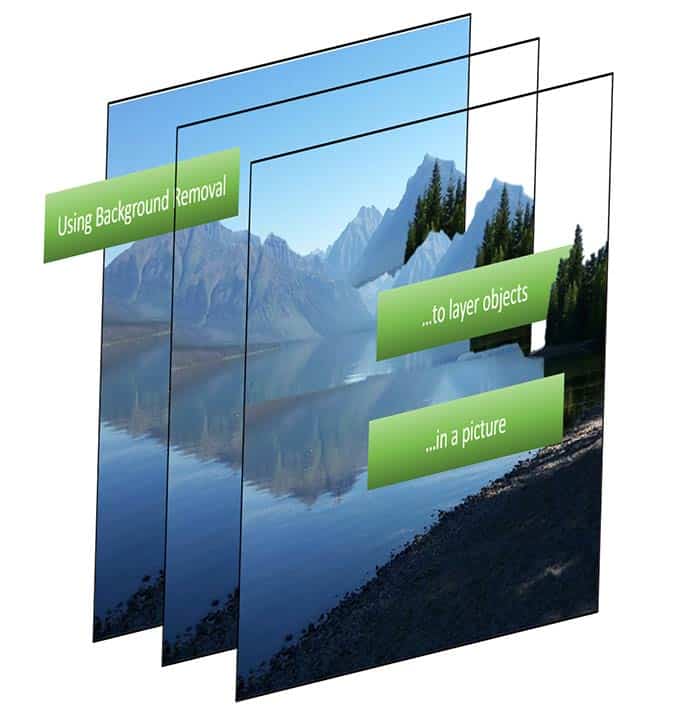 Geetesh: Thank you so much for sharing some amazing thoughts in this feature, Tucker. Many Indezine readers will find inspiration from the Background Layers trick! I look forward to interviewing you again.

See Also: PowerPoint Feedback and UserVoice: Does This Go Anywhere?

« Crop Pictures in PowerPoint 2016 for Windows

Crop Pictures (Crop to Shape) in PowerPoint 2016 for Windows »