Mike Power owns and runs Neuxpower, the company behind the popular compression software NXPowerLite and now also the free online version WeCompress. A big fan of helping people feel more awesome by making software that just gets the job done without making a fuss! He aspires one day to create software that will actually give people superpowers.

In this conversation, Mike talks about the new Analysis feature in WeCompress.

Geetesh: Mike, can you tell us about the new reporting feature in WeCompress, that shows a high-level breakdown of the content inside Microsoft Office and PDF files?

Mike: Given a Microsoft Office or PDF file, the new Analysis feature on WeCompress will quickly give you a breakdown of the content within, showing how the file size is distributed between images, videos, audio, fonts, and other document properties. It also provides helpful onward actions for content categories that we don’t compress, for example, with fonts it links to instructions on how you can manually remove fonts to reduce file size.

Geetesh: What motivated you to create this option, and what are end-users saying? Also, how does one get to you with feedback?

Mike: The feature was originally inspired by the support for our NXPowerLite software. Customers would occasionally write to us asking why their file hadn’t compressed more. They were rarely able to share the file with us so there was a limit to how helpful we could be, as there are lots of possible reasons a file might not compress well. It irked us that we couldn’t help those people more effectively.

We took the initial idea to add an analysis feature to WeCompress (and NXPowerLite) along to the Presentation Summit last year and during the show asked around. There were some very emphatic and enthusiastic responses from presentation designers who felt a convenient way to analyze the content in their files would be fantastic. That gave us the push we needed to go get started.

Since adding the feature, we’ve been able to help a number of people with files that didn’t compress already, and the experience has been so much better for us and the customer. There have been some useful suggestions from users already for additional information that they would like to see surfaced, such as showing the volume broken down by the page/slide, which is great! We’ve only really just launched the feature, so there are currently only around 400 users a week so far. No doubt by the time we reach 100k, we’ll be hearing a lot more about what people think of this feature.

There’s a feedback widget built into the tool but I’m also happy if people want to write to me directly with any ideas or requests on [email protected]. 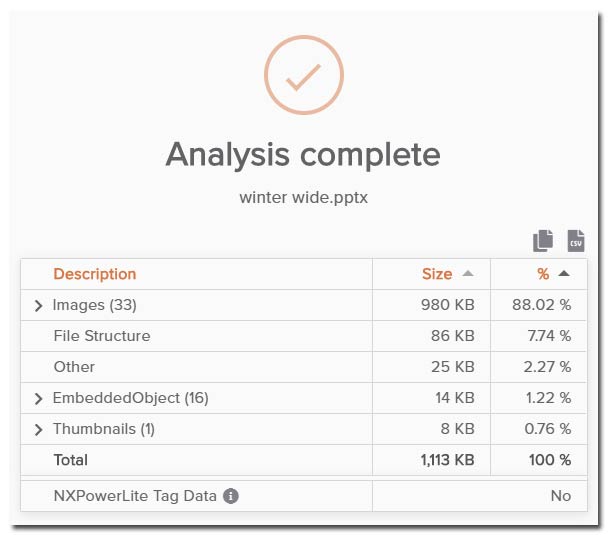 « Presentation Gallery in PowerPoint 365 for Windows