John Wilson is a Microsoft PowerPoint MVP who creates some cool add-ins for PowerPoint. He participates in the PowerPoint newsgroups and runs the PPTAlchemy site. John is based out of UK, and his newest add-in brings back the pattern fills that were removed from PowerPoint 2007.

In this discussion, John discusses the Pattern Fills Add-in product.

Geetesh: Tell us more about your Pattern Fills add-in for PowerPoint 2007, and what motivated you to create this add-in.

John: While answering questions on the PowerPoint newsgroup I noticed a fair number of questions about how to use pattern fills in PowerPoint 2007. The most usual answer was to create a texture fill that mimicked the old pattern fills and for a while this was my solution also. However it isn’t totally satisfactory and even if you create the fills carefully the final product isn’t really the same.

When I noticed that pattern fills still existed in Word 2007, I posted a tutorial on how to use them to create proper pattern fills in PowerPoint 2007. Pretty soon, I was getting 4 to 5 emails a day mainly thanking, so there is clearly a desire to use them!

In-house, we were using VBA to create the fills but VBA code is a little scary for many users, and we didn’t have the knowledge at that time to create a Ribbon tab or group in PowerPoint 2007 to make the code simple to use. When I read an article by Eric Patterson, I realized that it would be easy to adapt his Excel Ribbon to PowerPoint, and Pattern Fills was a reality!

It’s a totally free add in and available on our site. 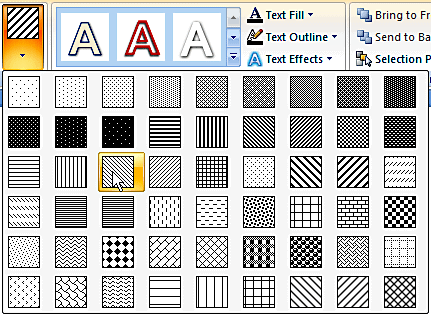 John: Mostly, they seem to be people who need to print diagrams and charts in black & white. The pattern fills do make it much easier to identify parts of the diagram and usually print out much clearer than textures and gradients.

Everyone that writes in now wants to know how to get pattern fills in graphs in 2007! So far I don’t think this can be done as the object model doesn’t expose the new graphing engine. One answer is to switch back to the old MS Graph from earlier versions of PowerPoint temporarily. You can do this with a registry hack. Steve (Rindsberg) has a tutorial on his site here.