Henrik Bergqvist has been a part of several start-ups and is one of the founders of Pickit, an aggregated image bank and Microsoft Office partner. Henrik has been practicing his entrepreneurial skills since the beginning of 2000. He has a history of mixing the creative and rational sides when it comes to education and work. Henrik has worked with business development within several markets and countries around the world such as Russia, India, Japan, USA, Turkey etc. He is also the author of the book, Ten Truths about Business Development, published in 2011.

In this interview, Henrik talks about the Pickit Plug-in for PowerPoint.

Geetesh: Henrik, can you tell us more about why you created the Pickit plug-in for PowerPoint?

Henrik: Since its launch in 1990, Microsoft’s PowerPoint has become an integral tool for presenting ideas and work results. In today’s world, the photo medium is crucial when communicating a concept and making a point. With 95% market share and over 1.2 billion users worldwide, it is estimated that millions and millions of PowerPoint presentations are made each day. But 85% of the photos used online are stolen from the internet and used without legal clearance, meaning that the photographers who own the images receive neither recognition nor financial remuneration. In the meantime, the sharing of photos online has skyrocketed in the last few years. We see that the existing image banks nowadays offer a great service for the professional photo buyers, but the non-professional photo users with low or no budget for photos are faced with no legal alternative to Google and Bing. We saw that the market is broken, and we decided to do something about it.

So we launched Pickit with the vision of a fair-trade photo market, where users can get personalized content for low or no cost and photographers and photo-sharing enthusiasts get rewards and recognition for their efforts. And with our Office integration, Microsoft customers benefit from being able to find shots that possess an individuality and creativity not found in standard stock images, adding genuine authenticity to their work. People who can’t find a particular image can send a ‘Photo Mission’ request to Pickit’s community of photographers, who are briefed on the exact needs of the user, and can submit their work in response. Anyone can upload content onto the Pickit platform, regardless of their photographic experience. Our curation is dedicated to serve slide show presentation creators. The Pickit Market contains photos from thousands of photographers worldwide, as well as aggregated content from other image banks and any person or organisation can publish and sell their photos on Pickit Market. We return 60% of the income to the photo providers and our community, meaning that photographers get rewarded for their contributions. 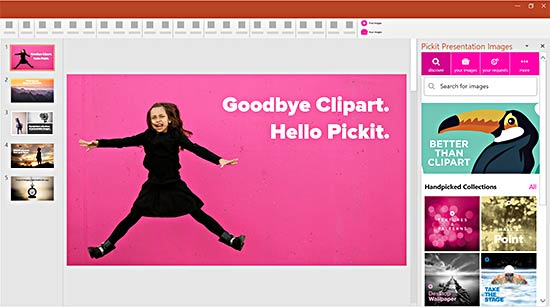 Geetesh: What feedback have you received from users of the Pickit plug-in for PowerPoint – can you share some thoughts?

Henrik: The feedback has been overwhelming. We saw the demand upfront, but it has been so fantastic to see so many knowledge workers from all spheres using and loving our tool. Since Clip Art’s death in 2014, Pickit has been the alternative to use within the Microsoft Office environment. What our users love most is the fact that they can find their images exactly where they need them, without ever leaving PowerPoint and Word.

And given that our community of photographers can share their creative work from anywhere, at any time with the help of our mobile apps, each client is presented with a variety of pictures from around the globe to choose from, easy and fast. By signing up to Pickit, users also get the possibility to curate their own image collections that they can later access on every platform. This is one of our most popular features, people find it to be both really convenient and great fun. In addition, our universal Windows 10 app for PC and mobile is used and loved by thousands of people with passion for pictures and all the wonderful ratings and reviews we get in the Windows store worldwide are a reflection of that. 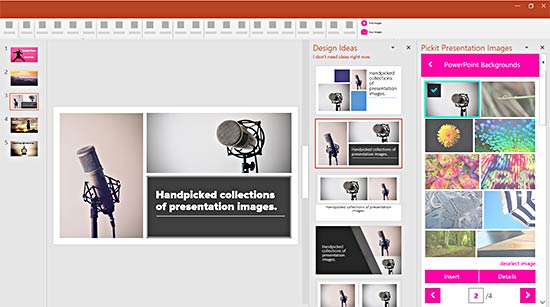