Dr. Stephanie Evergreen is an internationally-recognized speaker, designer, and researcher. She is best known for bringing a research-based approach to helping researchers better communicate their work through more effective graphs, slides, and reports. She is the 2015 recipient of the American Evaluation Association’s Guttentag award, given for notable accomplishments early in a career. She writes a popular blog on data presentation at StephanieEvergreen.com. Her first book, Presenting Data Effectively: Communicating Your Findings for Maximum Impact, was published by Sage in Fall 2013. Her second book, Effective Data Visualization, was published in Spring 2016. Both books hit #1 on Amazon bestseller lists.

In this conversation, Stephanie discusses her Chart Chooser Cards she created with Gavin McMahon.

Geetesh: Chart Chooser Cards are such a fun way to learn about the different types of charting options—how did you come up with this idea? And do you have any tips on how to use them in the best way?

Stephanie: The reason I love Chart Chooser Cards so much is because they give you the space to think. In all of my work – whether its coming up with the design for a great slide or thinking up the right chart type for a dataset – the clearest thinking comes when the computer is turned off. When I’m at my sketchbook or playing with some visual aids, everything comes together.

Gavin (my card deck co-creator) and I both have found that people do our best work when we aren’t staring at the screen. In fact, in data visualization, I see that when people try to visualize with their software open, they tend to rely on the defaults the software program presents them. But with the Chart Chooser Cards, we are giving people a platform to think about what they are really trying to say and providing several options with enough description and context that they’ll land on the right chart types to test out. 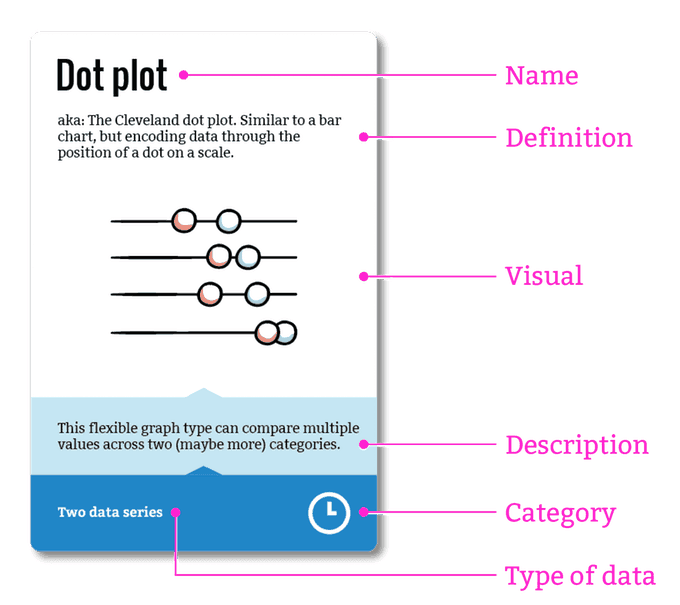 Geetesh: Can you share a story about someone using Chart Chooser Cards that other users can benefit from?

Stephanie: In one of our first workshops where we featured the Chart Chooser Cards, Gavin and I left some open space in the afternoon for audience members to reflect on their own datasets. They have the time to talk over ideas with their team mates and take advantage of some on-the-spot coaching from Gavin or I so that they leave with revised visuals. It’s one of my favorite parts of our workshop.

And when we introduced the Cards into the mix, we saw people actually mapping out their new dashboards using the Cards from the deck. So they were getting a sneak peek of how their dashboard could look by laying cards out on their tables before cracking open their laptop and spending hours remaking visuals that might not have worked. By using the Cards to sort out their thinking and data story, our audience members were saving themselves hours slogging away at the computer. It’s a pretty rad sight.

Text Pane For SmartArt Graphics in PowerPoint 2016 for Windows »