Founder and creative director at Synapsis Creative, Tom Howell has spent over a decade reshaping the way people use and view PowerPoint – using this underappreciated software to produce content for all platforms and audiences. By delivering gorgeously designed products as editable PowerPoint documents, his clients can edit and reuse these assets for a variety of formats and audiences. Tom regularly speaks at conferences and businesses globally, highlighting PowerPoint’s intuitiveness and versatility beyond presentation design.

Marcella Cheng never knew what was possible in PowerPoint until she worked at Synapsis Creative, and is now an enthusiastic advocate of quite possibly the most versatile and powerful design programs she’s ever used. She loves working on presentations and interactive projects the most and is a sucker for good stories and great visuals.

Geetesh: Tom, tell us about this new Santa Saves Synapcity 2: Someone’s Sabotaged Santa’s Sleigh game. It’s so detailed that I must ask you: how did you create this in PowerPoint and how much time and effort was involved?

Tom: From initial discussions to the game’s release was about two months of planning, testing, design, and development. Our team first voted amongst themselves regarding the gameplay style, visual elements, and features we could include. I asked the team that we include some customization elements, such as the player name and avatar creator. Our designer, Marcella Cheng, can give you a better look at the design and development process.

Marcella: We started by breaking the game down to figure out how to start building out all the stage types in PowerPoint. What needs to move? How does the player interact with all the elements? Then, most importantly, how does the player win the level? Getting the actual game to play wasn’t the difficult part, since we do a lot of animation and interactivity in our clients’ work anyway. It was setting up a system of triggers or sequence of interactions to trigger the end of the minigame that was often the most difficult to figure out.

How the entire slide looked for one of our minigames. As you can see, more stuff is happening off-slide than on.

Since PowerPoint does house lots of interactive tools, but not exactly in the same way you could custom code it in another program, we had to get creative with what we got. Similar to coding, we had to think in binary terms like “if the player clicks this, then this happens. If they click within three seconds, they pass to the next stage. If they fail after three seconds, we trigger the game over screen.”

Our present-shooting minigame. You can see in the Animation Pane that for this particular game, we used a lot of audio tracks to time and loop the present belts, as well as to track how much time the player had to shoot.

That’s pretty much how we build out the game. It starts out simple but could get pretty complicated quickly with a lot of variables. It certainly helped that we made the first game last year and that our team all game regularly in our spare time. Knowing how games work and even how they look/play/feel, helped us design and understand mechanically how our game should work.

Animation Pane for our Avatar Creator. This was hands down the most complicated scene to build in the entire game because of so many variables. The sheer amount of triggered animations to get this to work was insane.

We built out all the individual mini-game levels first. Once we got them all working and strung them together in a single PowerPoint. We spent the last two weeks play-testing and debugging all the glitches! Honestly, this was one of the hardest parts. Players often click everywhere instead of where you want them to. We needed to add extra elements afterward to stop them from doing that and crashing the game. 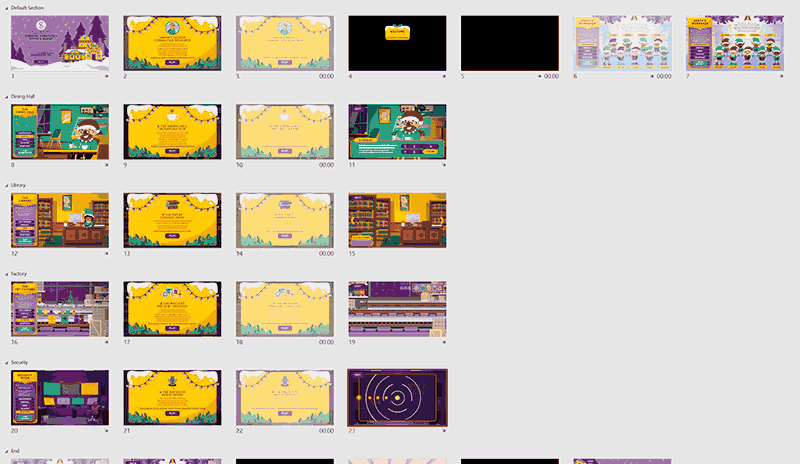 All 29 slides in our game. You can see the minigame itself actually happens all on one slide – all the other slides are just transitional slides

In the end, the entire PowerPoint file was only 29 slides and less than 10MB. Pretty impressive, huh?

Tom: Building an interactive game is becoming a Christmas tradition for us, so best believe we’re already flirting with different ideas and concepts for an even bigger adventure for 2021. In the meantime, this mystery/adventure game has been one of the most creative ways to deliver something fun and cheerful to our friends, clients, and a wider audience of design and presentation fanatics – especially as the holiday season falls upon us.

Geetesh: Can you tell us more about the presentation design and other work you do at Synapsis Creative?

Tom: At Synapsis Creative, we’ve been adapting to this global pandemic by offering more options and ideas to clients looking to improve their communications. Presentations, in particular, took quite a hit as public speaking events and conferences were either canceled or moved online. Consequently, our presentation designs have also shifted to online webinars – allowing our clients to still present and engage audiences while remaining conscious of social distancing.

Since our company’s inception, we’ve focused on pushing the limits of what’s possible in PowerPoint – always aiming to have someone ask us incredulously, “how on earth did you make that in PowerPoint.” We get a thrill from surprising people and they are always stunned at how easy it is to use PowerPoint themselves, which offers them the freedom and control to make their own edits and amends to our designs. This collaborative approach has really helped us stay connected to clients, particularly during this strange era of isolation.

Next year we hope that things will ease up in terms of restrictions and we can see a return to live events, but who knows? Currently, we’ve been doing a lot of work around video and animation with a few clients also stepping up their written content strategies – so we’ll continue supporting them with design and content that captures their brand identity while demonstrating the creativity and versatility only possible in PowerPoint.

« How to Give an Excellent Technical Business Presentation

Convert a PowerPoint Line to a Motion Path Animation: Conversation with Jamie Garroch »