Michael Samarin is a technologist, teacher, speaker and executive with 30 years of IT industry experience. With a Ph.D. in Computer Science, he was awarded as Microsoft MVP five times in the past. KeyWebX is Michael’s “serious hobby” company, where he develops tools for presentations, multi-screen shows, and Microsoft Surface Pen.

In this conversation, Michael talks about KeyWebX.

Michael, please tell us more about KeyWebX. Also, what motivates you to make software tools for presentations?

Michael: During my entire professional career spanning 30 years now, I am involved with presenting and public speaking. While content and story are the most important parts of your presentation, your tools can be of great help in delivering that message. And sometimes you feel like something is missing, you wish that PowerPoint, Apple Keynote, or Google Slides would have some functionality that doesn’t exist yet. That’s where I get my motivation from, when I prepare or deliver a presentation and wish that I could do it better if I would have some little additional tools in my arsenal. So, I write apps for myself and then turn them into inexpensive commercial products 🙂 Let me give you a few examples.

During the past year, many professionals across the globe started to work and present from home. Very often your home-office setup includes only a single screen, whether it is a laptop or a desktop PC. When you present a PowerPoint slideshow from a single screen with Zoom, Meet, Skype, Teams, etc., it’s impossible to see your speakers’ notes. Online, you can find thousands of tutorials trying to solve this problem with various degrees of success. When I faced this problem recently myself, I realized that proposed solutions are very cumbersome, especially if you have to deliver a very long-running workshop and actively switch between a slideshow and some other application windows. That’s when I came up with the idea of KeyPresentX – a small, customizable separate app that automatically connects to your PowerPoint slideshow running in a window and shows speaker notes and slides preview.


After successfully delivering an online workshop with KeyPresentX, I was confident with releasing it publicly in the Microsoft Store 🙂

Another story is related to Microsoft Surface Pen. I have been using the Surface Pro line of the two-in-ones for many years and the versatility and the lightness of the product are significant parts of its appeal, especially when traveling. Surface Pen is an indispensable accessory for me and always in my bag alongside the tablet. With the Surface Pen and an active button on top of the pen, Microsoft introduced the possibility to assign various actions to the button clicks. Many presenters who travel, including myself, were wishing to abandon their traditional Presenter Remote Controllers and use Surface Pen as a remote “clicker”. But alas, it was impossible. There were few 3rd party solutions involving scripting and unsigned apps at the time, but nothing that would fall into the “install, configure and forget” category. That’s when I created KeyPenX, I believe the very first app in its category published to Microsoft Store for Windows 10. Eventually, Microsoft introduced this functionality in PowerPoint, but I believe that my app still offers way better flexibility and customization 🙂 My development also didn’t stop and in addition to PowerPoint, KeyPenX can now control Google Slides, Libre/Open Office Impress, VLC, Adobe Acrobat, and much more.


Geetesh: Michael, can you share a real-world usage story about one of your products?

Michael: Yes, of course! When you make a product, you never know what creative and talented people can use it for 🙂 I created KeyShowX many years ago for controlling multi-screen PowerPoint and Apple Keynote presentations. I am sure some of your readers were encountering a situation, when they were wondering if it’s possible to start a slideshow on several PCs or Macs and control them simultaneously with a precise sync. You Geetesh, even wrote an article a couple of years ago about a similar scenario. KeyShowX does exactly this, but without any real limitations on how many presentations you can control at the same time. It can be three or a hundred.

Here are Mac and PC interfaces of KeyShowX Controller apps. 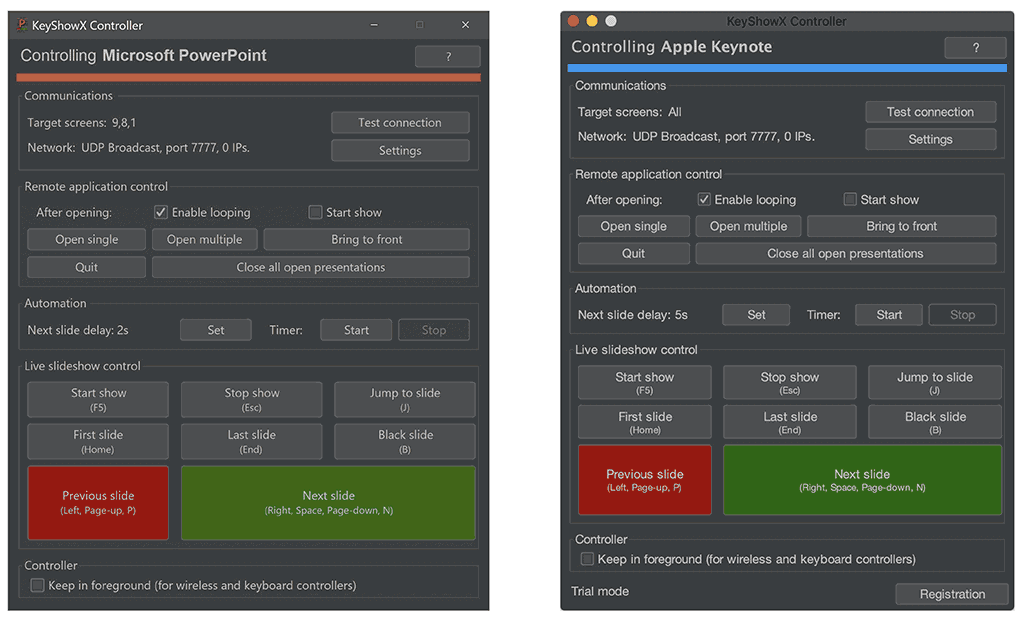 Then you deploy the KeyShowX Node app to your target computers with PowerPoint or Keynote.

My original intent was to have an inexpensive solution for trade shows, events, and very simple digital signage. That’s what I assumed and that’s what most of my clients use KeyShowX for. However, years later I discovered that KeyShowX was used in several well-known movies and TV shows. There is a great company Visual Alchemy, which provides video and computer services for film production. They were using KeyShowX for controlling multiple screens on the filming sets of The Wolf of Wall Street, The Amazing Spider-Man 2, The Good Wife, Madam Secretary, The Mysteries of Laura, Blue Bloods, The Blacklist, Allegiance, The Americans, and some others. So, whenever you see a scene in a movie with multiple screens, like a spaceship cockpit or an office full of screens, there is a great chance that those screens are showing a PowerPoint or Keynote presentation, controlled by my KeyShowX.

It is a great feeling when something you have created is being used as a tool of choice by very creative people in the industry you never intended your products to be used by originally. And this work helps make movie magic enjoyed by millions of people.